Car braking systems represent essential safety features for drivers, therefore they are subject to continuous optimization. ZF, which is one of the three end-users of the STREAM-0D project, implements ROMs and AI in its lines to keep braking actuation units features under control.

Brake Boosters deliver assistance in converting the drivers brake effort into brake pressure; this pressure is then converted in deceleration in the four brakes of each car.

Without a booster an average human being is only able to brake lightweight cars: as soon as the gross weight of the car exceeds a certain limit, assistance to reach a relevant deceleration would therefore be needed. Having a brake booster installed makes everything different and opens to a variety of additional functions to the advantage of the driver.

The first impressions when entering a car for the first time are visual and tactile and are related to the appearance of the interiors. Once at the steering wheel, instead, the ‘feeling of the car’ is provided by several different aspects: steering forces, force on the gas pedal to gain speed, coupling clutch forces, brake forces, etc., they all create the so-called driving experience.

In particular, the reactions of the car to brake and subsequent deceleration is also an important safety feature for the average driver and an enjoyable impression for many vehicle enthusiasts.

The braking ‘pedal feel’ has been designed and optimized for over half a century by plenty of meticulous engineers. This force and stroke feedback from the brake booster to the driver, needs to fulfill many expectations. One of these, is the ‘jump-in’, that describes how responsive the car/brake reacts to the drivers’ braking effort.

The diagram shows three different levels of jump-in records and a trace without booster. 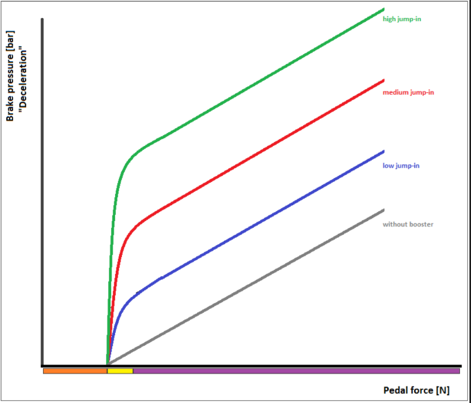 The higher the jump-in, the higher is the reactivity of the car – and the driver basically gets the ‘wow effect’. In other words, a light pedal effort causes a strong vehicle deceleration… and this is when the driver says: “Wow! My car brakes awesome!”.

It’s easy to understand why sport cars need a higher jump-in than regular cars, in which too much ‘wow effect’ is not very convenient for passengers. That is why every car manufacturer has his own philosophy in terms of braking features. This is why, for a braking actuation units producer such as ZF, control on the final product to be delivered to car manufacturers is fundamental.

Keeping the ‘wow!’ under control

This brings us to the industry 4.0 approach to braking systems manufacturing. The goal, for brake actuation unit manufacturers, is to have systems showing no variations when used.

In such a sophisticated product, though, the challenge is not just measuring, for instance, some kind of dimension and then adjust it. To keep the brake actuation unit features under control – with its elastomer based control valve – there is more to do. In order to achieve a final product that is (nearly) free from defects, predictions of the outcome of the production line are really useful. These predictions are based on a sophisticated mathematical modeling which is in turn based on complicated equations. Solving these equations is extremely time-consuming, so much that it is not possible to perform the activity during the mass production cycle times of this specific part.

To overcome this issue, ZF implemented in its production lines Reduced Order Models (ROMs). ROM is a modern math-based technology that reduces all the information that delivers a low impact to the problem whilst focusing on pertinent and significant data. ZF is one of STREAM-0D end-users and ROMs are one of the technology drivers of the project.

The implementation of ROMs is helping ZF to cut cycle times and reduce the needed computer power down for calculations to a level that suits boosters’ manufacturing process. In order to combine the use of ROMs with Artificial Intelligence, ZF set-up a multi-disciplinary team with the aim to deliver the best and most predictable booster the world has ever seen.

This article by ZF is part of the Bits of STREAM-0D series of contributions from the project’s consortium partners. Periodically, on STREAM-0D channels, a different topic will be given prominence, along with videos featuring members involved in the project.